The Twelve Nights series is set on a fictitious continent which is divided into several countries. 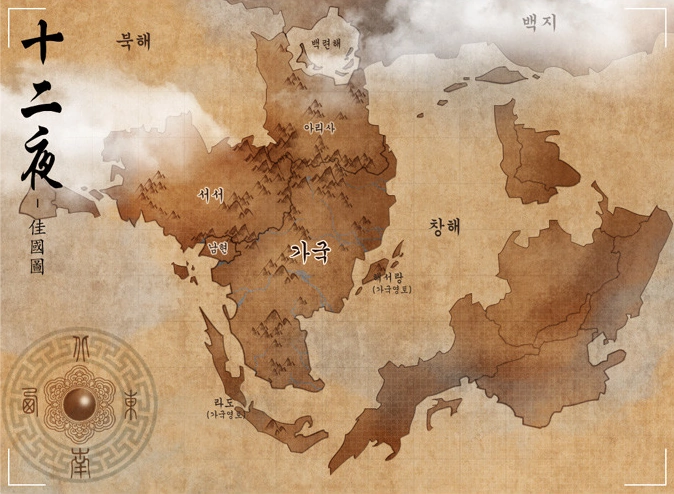 Ga Guk (가궄) is the central setting of the series. It is located in the center of the continent. It is bound by Nam Hyeon in the west, Seo Seo in the northwest, Ah Ri Sa in the north, and Chang Hae in the east. Its capital is Hyang Ju, and its latest monarch is King Jin Jeok.

Seo Seo (서서) is a neighboring country of Ga Guk located in the northwest of the latter, north of Nam Hyeon, and south of Buk Hae. Its latest king is the First Prince of Seo Seo, whose son, Jang Rok Ha, is set to be coronated as his successor following his abdication.

Ah Ri Sa (아리사) is bounded by the Baek Ryeon Sea in the north, Chang Hae in the east, Ga Guk in the south, and Seo Seo in the southwest. According to Heuk Rang, the Inspector General from Ga Guk working for Deung Ha Bul Myung confessed that there were weapons smuggled from Ah Ri Sa.

Nam Hyeon (남현) is a small country bound by Seo Seo in the north and Ga Guk in the east. Hyun Bin ordered some men from this country to assassinate Yoo Dan Ah, but they failed. This is also where smuggled weapons were found by Bi Yeong Pal Mu.

Ja Eui (자의) is located in the southeast of Ga Guk, bordered by Nam Hyeon in the west and Hae Seo Rang in the east. It is the mother country of Yoon Yeon Lee but was conquered by Ga Guk.

Hae Seo Rang (해서랑) is an archipelago located between Ja Eui and Ga Guk in the west, and Chang Hae in the east. It is a domain of Ga Guk.

Lado (라도) consists of two strips of islands located in the southwest of Ja Eui. It is also a domain of Ga Guk.

Baek Ji (뱈지, lit. "White Land") is an enormous landmass in the topmost part of the world of Twelve Nights.

Buk Hae (붘해) is a sea in the northwest of the continent consisting of Ga Guk, Seo Seo, Ah Ri Sa, Nam Hyeon, and Ja Eui.