The Royal Family of Ga Guk is the household of the governing monarch in the nation of Ga Guk. The latest monarch in the family is King Jin Jeok, who succeeded his half-brother, King Jin Won, after a rebellion initiated by the rebel army Deung Ha Bul Myung.

A monarch is coronated regardless of age and possibly gender under special or unwarranted circumstances. For instance, Yi Won assumed the throne at the age of 10 years old, though his mother, Yoon Yeon Lee, took over as his regent until he reached the age of 20 years old.[1] After the death of King Jin Hyul, his spouse, Queen Ahn Young, also possibly became the country's regent as queen dowager.

However, succession is largely governed by male-preference primogeniture, in which sons of the king inherit before daughters. This was hinted when King Jin Hyul mentioned that, should his soon-to-be-born twins were to be of opposite genders, there would be no need to "fight for the throne", making it apparent that the male was to be heir apparent instead of the female regardless of their twinship.[2]

Moreover, succession is based according to birth order, though the child's lineage ultimately overrides this. For example, Yi Won was the eldest son of King Jin Hyul. However, since he was the son of a consort, Jin Hyul's heir apparent was Crown Prince Yi Jeok,[3] his eldest son (and the older twin of Prince Yi Hwi) with his queen consort Ahn Young.

In the event of having twin heirs apparent of similar gender, such as the case of King Jin Hyul and his twin brother, it was never mentioned how the succession would be, though it was stated that the twins had a bitter rivalry and fought for the throne. This might hint that twins, especially twin princes, had equal chances of accession to the throne due to their twinship.[2] 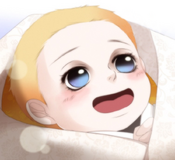 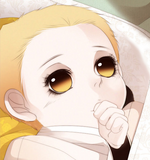 Below is the family tree of the members of the Royal Family of Ga Guk. (Jade text denotes monarchs in the family.)

Retrieved from "https://twelvenights.fandom.com/wiki/Royal_Family_of_Ga_Guk?oldid=8980"
Community content is available under CC-BY-SA unless otherwise noted.